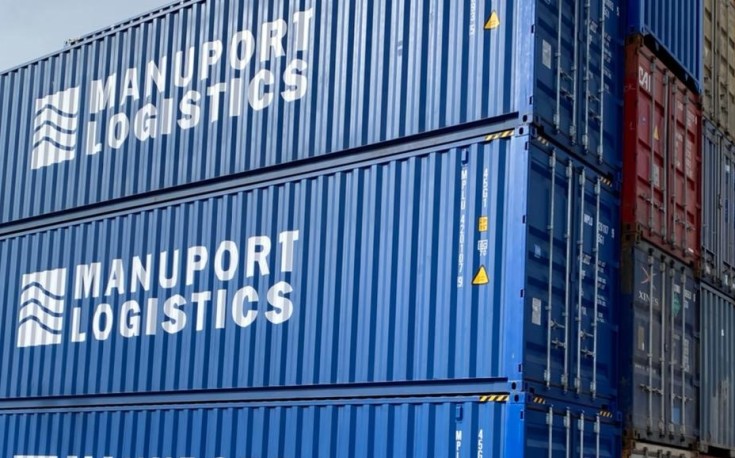 Our Expertise
Update May ‘22 In order to maintain a clear overview, we have broken this update down into several segments covering different areas worldwide. Although not all trades are in this report, similar trends apply. If you require more detailed info on a specific trade, you can always reach out to your Manuport contact.

In the previous customer letter, we noted some signs of less pressure on the Asia-Europe connection. Although the strict lockdown in Shanghai has shaken the – still unstable – market, the rates have kept on decreasing. In recent days, we have seen the rates leveling out.

The ongoing Covid-19 situation in Shanghai, and the restrictions imposed to halt the spread of the virus, have impacted the terminal and its operations in these past weeks. The lockdown has been eased in some areas, and the situation in the port of Shanghai is starting to get better, though the trucking and labor shortages remain a challenge in the local region.

The main reason for the decrease in current pricing is the capacity, which has been increased. According to Alphaliner, a total capacity of 5.45 M TEU is deployed between Asia and Europe, which is an increase of more than 10% compared to April last year. The world container fleet has grown by a little above 4% in the same period.

The Ocean Alliance (OA) is now the largest of the 3 alliances in this trade with a market share of 36.8%. This is thanks to CMA and Evergreen, the two shipping lines who have added the most capacity in the market. The OA has overtaken 2M, with Maersk and MSC, which currently deploys 35.6% of all capacity.

For the Asia-U.S. connection, the pressure has also decreased, although the rates remain high. This is mainly because of the ongoing issues on the U.S. landside. In operating capacity, this trade has grown by a massive 24%.

For many South East Asia countries, it remains a big issue to get sufficient equipment to cover their export volumes. The direct services keep absorbing most of the volumes, leaving the outports without incoming equipment and fewer services for outgoing shipments.

From Europe to Asia, the space situation is ok. Rates went down severely and are now stabilizing. They have now reached a level where the shipping lines are in two minds as to whether to load the containers with paying cargo, or to position them empty without any compensation from paying customers. If they load cargo, the shipping lines will have more delays getting the available equipment in Asia (free times, etc.).

Rates to Oceania remain very high, as the transshipment ports are still affected by a lot of congestion. This is causing delays in the schedules, missed connections, and high operating costs for the shipping lines.

There are currently major delays in the handling of ocean freight at the Port of Hamburg. The delays of the last few months have caused an add-on effect and have created waiting times of up to 21 days. In Hamburg, some terminals also apply a very strict yard opening time to prevent idle containers on the congested quays but with the instable schedules, this is causing big issues to deliver cargo full on quay.

The Russian economy has been hit by its biggest recession since 1990. It is estimated that GDP will drop 22% between the beginning and end of 2022. The main elements of the current sanctions are blocking the foreign assets of Russian banks and blocking the use of the SWIFT financial messaging system.

Similar to other regions in the world, inflation is also hitting the U.S. With estimated inflation of above 8%, the Federal Reserve (= the United States' central bank) has increased interest rates by 0.5%. This increase is the biggest hike since the year 2000.

The purpose of this increase is to cool down the economy by making loans less attractive, and so lowering overall inflation. This action is pushing up the exchange rate of the U.S. dollar. The European Central Bank will therefore most likely follow suit and raise interest rates.

In the meantime, transatlantic trade is at an all-time high. According to the World Container Index by Drewry (WCI), the trade from Europe to the U.S. main ports is well above 7000 USD / 40’ for the first time ever.

These high rates are mainly triggered because of the withdrawal of capacity for transatlantic trade. This capacity has been taken out to relieve pressure on the ports, though in practice it has not proven to be the right solution either. (*please also see some specific info on the shortage of container chassis, under 'General' below*). The southern ports of Charleston and Savannah remain in a heavily impacted region. The hinterland connection remains very tough and the unreliable sailing schedules are only adding to the bad situation.

With the situation in Ukraine, we are already seeing some flows shifting to other regions. Some commodities like grain, mining ores, and other bulk cargoes are not only being shifted geographically but are also being shifted to containers to better fit customers’ requirements. One of the areas with a big potential to jump into these gaps is North America. The complex inland logistics are however causing many difficulties (see under 'General' below for more info).

Like almost every other country, Brazil and Argentina have been hit with high inflation. An additional factor is that they are impacted by their respective currency devaluations. These two factors will probably cool the overheated markets. But if the carriers do not return capacity, which has been shifted to more lucrative Asia trades, this market will remain with structurally lower capacity, meaning higher market rates.

For the moment, the market continues to be very strong, which is pushing the market rates upwards and the validity of these rates downwards. Spot pricing is very volatile and painfully difficult to obtain as port omissions and capacity crunches dictate the market, especially for the main trade between North and South America.

On the West Coast, the market remains very tight as the Panama Canal is a serious bottleneck and the volumes out of Asia also remain above the normal levels.

Containers are dwelling longer. Either because importers are taking longer to unload the cargo or shipping lines roll export bookings due to void sailings invoked by congestion in the ports. Omitting a port is no real solution, it is mainly a mean for the shipping lines to reduce their operational cost as they will not lose time caused by the congestion. Omitting a port also means no export containers are evacuated either. This is one of the major reasons that the chassis turnaround is considerably slower.

To cope with the slower turnaround, manufacturers are building new chassis as quickly as possible, but they are struggling with hiring labor and procuring subcomponents (such as axles, air tanks and tires). A problem that is seen worldwide in the building of automobiles, trucks, and trailers.

Monthly loaded imports into North America have exceeded 2 million TEU for 19 consecutive months between July 2020 and January 2022 and with regional warehouses filled, importers are in doubt about what to do with the containers. They can leave them in the port, in a secured terrain or parked outside the warehouse. The first option results in demurrage fees, while the second and third options cause the chassis to dwell for days or weeks. According to the chassis manufacturers, they will build 20,000 to 25,000 container chassis in 2022. The container/logistics industry however needs about 45,000 to 50,000 to address the current demand.

The container backlog remains most severe in the Charleston and Savannah area. There are more than 7,000 containers sitting in the port of Charleston alone for more than 15 days, and more than 3,000 over 30 days. With less ships calling these ports, the congestion is going down but at a very slow rate.

According to DCLI, USA’s biggest container chassis provider, the key to clearing the backlogs is to reduce the street dwell times. Today they are on an average of 16 days and the average before covid was about eight days. With the current demand and issues, the chassis shortage will last till mid-2023.

The US FMC (Federal Maritime Commission), has fined HLL above USD 800,000 after ruling the carrier had deliberately manipulated detention and demurrage (D&D) charges. The D&D damages were charged for containers that were prevented to return to the depot. In May 2020 the FMC have published an interpretive rule which states that D&D penalties should be waived in such a situation. It is to be seen how this ‘Hapag case’ will act as a precedence for other shippers and drayage firms which are keen to file complaints against the carriers.

Alphaliner has calculated that the idle fleet on a global scale has risen to 3.4%. This is still low compared to ‘pre-covid-times’, where this used to be around 6%, however compared to the 2% of the past months, this is a significant increase. (1% equals +/- 600.000 TEU) 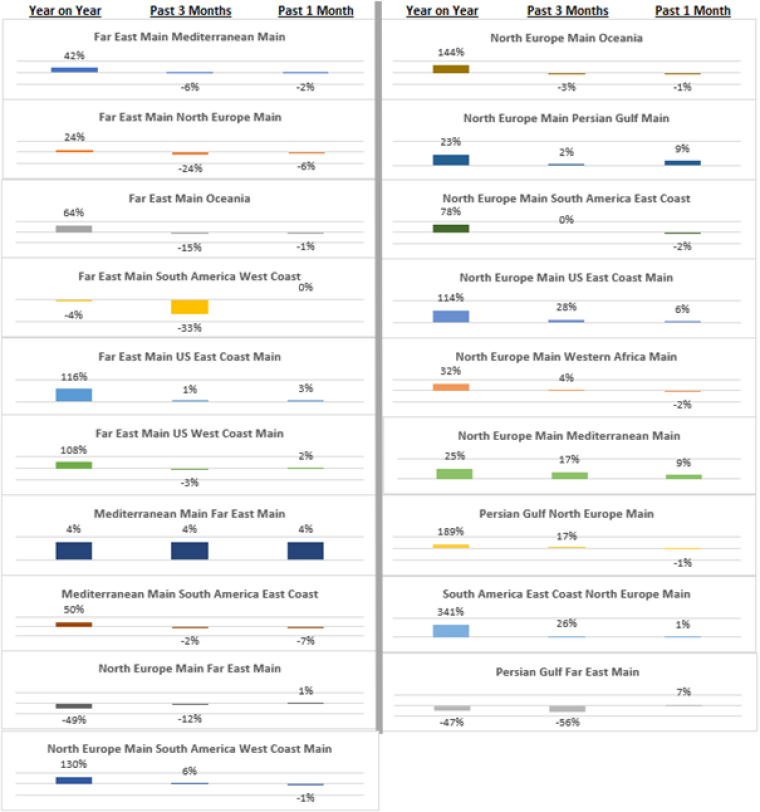 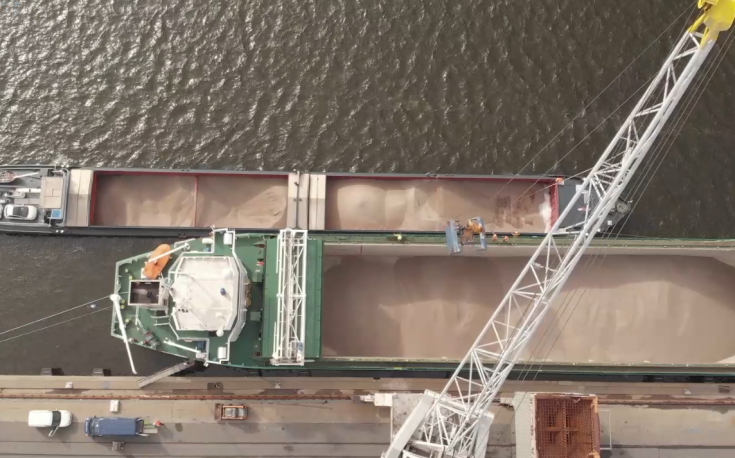 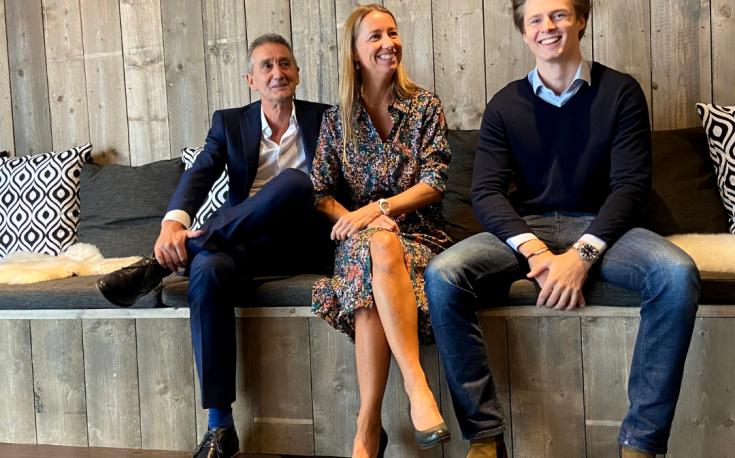 Update 9 – following earlier blog posts. In order to keep some overview, we try to break it down into several segments covering differe...
8 minutes